Monthly Review and its editor John Bellamy Foster have been at the forefront of efforts to develop a Marxist ecology over the past few decades. In their November 2018 issue they reprinted an article by Foster and Paul Burkett, “Value isn’t Everything” that also appeared in International Socialism 160. In their article, Foster and Burkett critique attempts by some Marxists to assign value to the labour carried out by animals and other natural forces. Rather than valuing non-human nature and bringing it into the circulation of capital, Foster and Burkett call instead for a “revolutionary ecological and social transformation…directed at the rational regulation of the metabolism of nature and society by the associated producers”.

The article appears alongside a short excerpt from Rosa Luxemburg’s The Accumulation of Capital which makes a similar point. Luxemburg criticises Adam Smith and David Ricardo and defends Karl Marx’s account of value as something that appears under definite historical conditions, ie the production of commodities in a capitalist society, rather than being produced by all types of labour.

Continuing to address the debates raised by the rise of ecological Marxism, December’s Monthly Review includes two articles that, in different ways, respond to Ted Benton’s contention that Marxism is “speciesist” or insufficiently attentive to human-animal relations.

Revolutionary Russia has published an interview, by George Souvlis and Arturo Zoffman Rodriguez, with the historian Stephen A Smith. Smith discusses his influences, his early study of workers’ self-organisation in the book Red Petrograd, his changing perspectives on the Russian Revolution and his research on the working class in China. Smith argues that the First World War was the “mighty accelerator” of the Russian Revolution, rather than revolution arising out of the contradictions of capitalism:

Reflecting on the legacy of October 1917, he concludes:

For the Bolsheviks the significance of October lay in its promise to commence a world revolution that would put an end to capitalist exploitation and put the working class into power. A hundred years on, it’s hard to argue that any of that came to pass. What stand out as the more enduring elements of their revolution are things that they would have considered secondary to proletarian emancipation: commitments to causes such as women’s liberation, nation-building, anti-imperialism, forward looking experiments in education, law, urban planning and architecture, and radical experimentation in the arts, literature and music. These things have left a legacy, in spite of Stalin’s efforts to cancel them out.

The latest Irish Marxist Review (volume 7, number 22) is a Northern Ireland special issue addressing the legacy of 1968 and the key questions for the North today. Seán Mitchell asks whether a united Ireland is inevitable due to the crisis sparked by Brexit and starts a discussion about the strategy socialists should adopt in debates about what a united Ireland might look like. In “1968: the Year the North Exploded”, Matt Collins addresses the civil rights movement, while Eamonn McCann puts an international perspective, explaining how Derry’s demand for civil rights was influenced by movements such as the Black Panthers in the United States.

The latest issue of New Left Review (II/113) has some interesting articles. Göran Therborn surveys Sweden after its indecisive election, demonstrating the extent to which neoliberal policies, often implemented by social democratic governments, have eroded the welfare state and opened the door to the racist right. David Kotz speculates that neoliberalism may be coming to an end in the US. He argues that the neoliberal “regime of accumulation” allowed capitalism to recover from the crisis of the 1970s but that the slow growth since the Great Recession suggests it has run its course. Kotz belongs to the “Social Structures of Accumulation” school of Marxist economists, who reject Marx’s law of the tendential fall in the rate of profit, but his article contains much interesting and well-presented material. The issue also includes some intriguing notes that Perry Anderson took of a ­conversation he had with the Marxist philosopher Louis Althusser during the summer of 1977. Apparently Althusser “was surprised to learn that there was any Marxism in the United States”, and bemused that Australian philosophers were arguing about his interpretation of Marx. 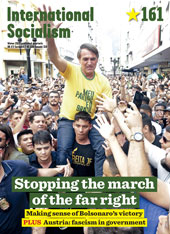