“The Recession Is Over”.1 That is the message with which much of the media has chosen to mark the anniversary of the collapse of Lehman Brothers and the transformation of the credit crunch into the worst economic crisis since the 1930s. Governments looking for votes have been quick to take up the message. “We are on the road to recovery,” Gordon Brown told the TUC in September.

The message is deceptive. Recession, in the purely technical sense of a continuing fall in economic output, has stopped in some countries—for the moment at least—but the wider crisis has a long way to go. Little of the output lost in the recession has yet been made up (as figure 1 shows). Eurostat reports that it actually continued to fall in the eurozone in June and July.2 Claims that the banks are restored to health are preposterously premature: the Moody’s rating agency forecasts further losses for British banks over the next few years of at least £130 billion, a figure which it says could rise to £250 billion. The vast government expenditures undertaken at the height of the panic a year ago must somehow be recouped. And all the forecasters assume rising unemployment for at least the next 12 months. The economic, social and political repercussions of the crash will be with us for the foreseeable future.

Fears for the future appear in the same financial pages that headline the supposed turning point. Nouriel Roubini is not alone in warning “there is a big risk of a double-dip recession”3 nor is the National Institute for Economic and Social Research alone in expecting a period of stagnation now, with “output rising in some months and falling in others”.4 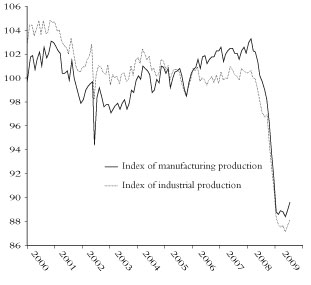 The total collapse of the financial system a year ago was prevented not by its supposed dynamism, but by states replacing private debt with government debt, which has now risen to levels never seen before in peacetime. Further state expenditures were then needed to prevent a complete collapse in the markets for industrial and commercial capitalists.

In Western Europe and North America stimuli such as “cash for clunkers” schemes, which pay people to replace old cars, are behind much of the limited revival in industrial output. But they have not raised industrial investment—a precondition for self-sustaining recovery.

What is more, the limited recovery in output is exaggerated in the statistics. Fear of a terrible slump led firms to cut back to a minimum their stocks of raw materials, components and finished goods awaiting sale. This meant they were caught short when stimuli created new demand requiring a quick burst of restocking to catch up. But once they have caught up, they can be expected to operate at a reduced level.

In China the stimulus has taken the form of encouraging provincial and local government to undertake a massive upsurge in infrastructure spending (roads, railways, airports, dams) to compensate for lost export markets, while loosening controls on bank lending. Bank lending has risen 30 percent. And here the effect has been to raise industrial investment—also by 30 percent. This has raised raw material prices elsewhere in the world but cannot act as a locomotive pulling the world economy forward since Chinese imports have, in fact, continued to contract and the country’s economy, which contributes just 8 percent to global output, is simply not big enough.

Most importantly, the reliance on stimuli has raised a huge question for each national component of the system: how long should governments keep the stimuli going?

States have had to turn to borrowing to cover the combined cost of the bank rescues, the stimuli and the huge loss in tax revenues caused by the recession. But they cannot do so indefinitely without eventually damaging their credit ratings. This is causing deep, sometimes bitter, debate among those who advise them. On one side are those who contend that the only way to avoid dangerous inflationary consequences is to start reducing borrowing now by cutting public expenditure. On the other are those who warn that doing this too soon will push the system back into deep recession, with even hardened neoliberals such as Martin Wolf of the Financial Times warning that “the extreme fragility of the private sector” means that “premature monetary and fiscal tightening could cause another economic downturn”.5

These are not mere intellectual arguments. They reflect the pressures faced by different capitalist interests. There are those who have benefited from the stimuli and those who have not. There are governments that have spent more on the stimuli, like the US, and those that have spent less, like Germany. And there are those that are going to start cutting back on spending in the near future—with Britain due to take the lead early next year—and those that fear they will suffer from this. Adding to the contradictory pressures are the banks that were saved by government handouts a year ago and now feel reinvigorated enough to demand that the same governments follow their diktats.

The cutters are winning. The centre-right parties openly accept the logic of cuts. European social democrat and Labour parties, looking for votes, have tried to avoid speaking of cuts, but are now shifting their tone. In the US the Republicans are beginning to feel they can gain the support of conservative Democrats in Congress by going on the offensive. And even in China, where the level of government borrowing is less of a problem, there are fears that cuts to the stimulus package are necessary to stop it creating a speculative bubble, even though Premier Wen Jiabao warns that the “foundations of recovery are not stable. We cannot afford the slightest relaxation or wavering”.6

Whatever happens globally, attempts at deep cuts are inevitable in Britain. All three mainstream parties are drawing up their own plans for after next spring’s election. Gordon Brown’s admission at the TUC that he plans cuts simply makes public a policy his government has been privately committed to since April. This in turn has given further confidence to those who want to prepare the ground for the biggest cuts since the Second World War. When Liberal Democrat leader Nick Clegg spoke in September of “savage cuts” he was articulating what the Tories and key New Labour figures such as Peter Mandelson and Alistair Darling really want.

The pressures on states to cut back on public expenditure are rooted in the problems that led to the crisis. We have argued in this journal that the financial bubble and bust were symptoms of a deeper malaise for capitalism. Its partially successful attempts to raise profitability to the level needed to sustain accumulation could only be achieved by cutting the share of output going to workers. That left a gap in markets for finished goods which was plugged by growing consumer indebtedness.

The stimuli are, in effect, attempts to use government spending (and borrowing) to replace private debt-fuelled spending. Capitalists everywhere fear that a failure to deal with the rising state debt will lead to either inflation or tax rises that will cut into profitability, so they are caught between supporting cutbacks to guarantee profitability and opposing them lest they damage markets. The easiest way for capitalists based in any state to deal with the dilemma is to rely on other states—and other capitalists—to pay for the stimuli. But that in turn feeds into the recurrent and sometimes bitter wrangling between states, of which small but significant symptoms are the US tariffs on Chinese tyres and the Chinese arrest of Australian RTZ executives.

There are two conclusions to draw from all this. First, the crisis, in the sense of the global economy being in a mess, is far from over. Second, the attempts by governments to find an “exit strategy” will lead to continued tensions within and between states and to a concomitant weakening of the ideological messages that capital as a whole would like to convey.