A review of The Welsh Way: Essays on Neoliberalism and Devolution, Daniel Evans, Kieron Smith and Huw Williams (eds) (Parthian, 2021), £10

Mythmaking is plentiful in the political and cultural history of Wales. For instance, the antiquarian Iolo Morganwg (also known by his English name, Edward Williams) was a populariser of Welsh cultural history in the late 18th and early 19th centuries—much of his work, however, was forged. The present too sees much political mythmaking: “Wales…has long been imagined both east and west of Offa’s Dyke as a kind of sanctuary, its political identity safely inoculated from the worst excesses of whatever successive Westminster governments could throw at it.” (p1) The Welsh Way is an attack on this. It targets particularly the notion of “clear red water”, an idea deployed by Welsh Labour leader Rhodri Morgan in a speech in 2002, which is claimed to protect not only Wales from Westminster, but also Welsh Labour from Blairite neoliberalism.

The essays in this new collection argue that, despite the socialist rhetoric of Welsh Labour, modern Wales is a reactionary and “deeply neoliberal” (p5) country. The word “neoliberal” is used throughout the book, yet is problematic in terms of definition and significance—a point to which I will return. The main effects of devolution, the book argues, have been to consolidate Labour’s dominance in this “struggling, disenfranchised, poverty-ridden enclave of the British Isles” (p5).

Remarking on a rousing, socialistic 2019 speech by Wales’s current first minister, Mark Drakeford, the authors ask two questions. First, if Britain is, as Drakeford says, so irredeemably neoliberal, why is Welsh Labour so hostile to any talk of secession? Second, if the Welsh government is so radical, why did it make such a concerted effort to distance itself from Jeremy Corbyn? This second question is an important one, directly challenging Welsh Labour’s boasts of radicalism. The level of hostility directed at Corbyn and his supporters by significant sections of Welsh Labour—notwithstanding Corbyn-supporting Drakeford—is widely unappreciated. The leaders of Welsh Labour played a disingenuous role throughout the Corbyn era, happy to benefit electorally from his popularity, but also keeping the phenomenon he embodied at arm’s length. A thorough analysis of Welsh Labour’s relationship to Corbyn would have been one way of exposing the Welsh leadership’s radical pretensions. Unfortunately, however, this is not offered.

The introduction lays out the book’s overview, calling for a rejection of the “stagnant Labourist view of the Welsh past and present” (p21). Instead, it advocates an accurate analysis of “Welsh neoliberalism”, “rooted in a Marxist understanding of Wales’s distinct historical development and political culture” (p21), which can delineate “a new ‘Welsh way’, one that is truly radical and transformational” (p22). However, although the writers describe in detail the ways in which the current system falls short, they fail to pursue solutions. This is partly because the type of Wales envisaged is unclear. The book seems to be a contribution to the widening discussion about independence: it quotes Leanne Wood, the left-leaning former leader of Welsh nationalist party Plaid Cymru, and the foreword is by actor Michael Sheen, who is sympathetic towards an independent Wales. Yet the book does not examine the issue of secession. The most unequivocal statement, “I would push for Welsh independence” (p394), occurs in one of the freshest and most interesting chapters—an interview with young people in Butetown, Cardiff—and is spoken by a young man of Sudanese parentage.

Moreover, if this volume is intended as a guide to action, it contains one gaping omission. The organised working class is virtually invisible in its pages. There is an interesting chapter, for example, about Welsh farming within the capitalist food system, but there is no chapter on Welsh trade unions and nothing on the recent strikes in the Driver and Vehicle Licensing Agency over Covid-19 safety measures.1 It was by no means quiet on the industrial front when the book was being written, and disputes have escalated in the time since. The last year has seen walkouts over pay by Unite bus drivers on Stagecoach and Arriva as well as moves towards industrial action by nurses, pharmacists, council workers, school staff and others. Communication Workers Union members in Llanelli stuck in October 2021 over the sacking of a colleague—over 98 percent voted for action on an 87 percent turnout. The book contains a few paragraphs on the 2019-20 closure of Ford’s Bridgend plant, but there is no attempt to give the perspective of the workers in the Unite and GMB unions. The closure is portrayed as being decided above the workers’ heads, between the Welsh government and Ineos, the British multinational that initially agreed to invest in a replacement car plant but then pulled out. Moreover, although Ineos is indeed a disgusting company run by tax-avoiding union busters, it shows a disregard for the 1,700 job losses to conclude bluntly, “Mercifully, Ineos decided at the last minute to pull out” (p19). GMB and Unite members could have taken action to save the plant, whether by a national strike against Ford, occupations or a mass campaign for nationalisation to save jobs. Sadly, the book makes no mention of these possibilities.

Likewise, in the whole chapter on Welsh education policy there is no reference to any specific teaching union nor any interviews with education workers. Although there is a section on health and social care, there is no chapter on Wales’s biggest employer, the National Health Service, nor any interviews with healthcare workers. There is much said about policy in these areas, but the workers within them are portrayed merely as victims of the Welsh government’s failures. If the book is intended to draw on Marxist ideas, conceiving the emancipation of the working class is the act of the working class should be axiomatic. Yet this does not inform the book at any level.

The lack of a sense of struggles from below is not confined to the book’s treatment of the trade unions. Other initiatives and campaigns are also omitted. For instance, an important chapter in the book examines the notion of Wales as a nation of sanctuary, examining the problems faced by asylum seekers and refugees, particularly at the now closed Penally camp in Pembrokeshire. Although it is important to condemn the harassment of refugees by racist and fascist thugs outside the camp, the book ignores the anti-racists who mobilised for weeks to counter their influence. The aim of the far right was to win over Penally residents, but they failed to do so due to the influence of activists from Stand Up To Racism and other groups. These activists built solidarity between the refugees and the local community, exposing the fascists’ real aims.

The chapter correctly points out that the far right has been attempting to strengthen its presence in Wales for some time, arguing that this has “been allowed…by a meek political class, and to some extent embraced by a public who are fed up with a stagnated Welsh Labour”. However, this ignores the many anti-racists—including activists in Labour and Plaid Cymru—who regularly turn out whenever the far right mobilise and make sure they are vastly outnumbered. Nor is there any mention of the ongoing campaign at the football ground of Swansea City against fascists who have organised among fans to boo players who “take the knee” in solidarity with the Black Lives Matter movement. Impressively, the Jacks Against Racism and Fascism group took the fascists on, with supporter groups from Swansea City and Cardiff City coming together to oppose racism under the slogan, “Rivals on the Pitch—United Against Racism”. The far right were completely outflanked.

Despite these weaknesses, the section on popular culture raises interesting questions. Nevertheless, although it calls for popular cultural initiatives that can combat the influence of the far right, bringing together Welsh-language, socialist and environmentalist traditions, it makes no mention of the existing groups that already do this. Love Music Hate Racism in Swansea regularly stages lively music events. There is a plethora of poetry groups, two of which—Live Poets in Swansea and the long-established Red Poets in Merthyr Tydfil—are explicitly left wing. For the past ten years, the Llanelli 1911 Rail Strike Committee has combined politics, history and culture in its commemoration of the strike and uprising. So does the Merthyr Rising festival, featuring radical performance artists and musicians such as Lowkey, Attila the Stockbroker and others.

The section on housing correctly condemns the Welsh Government’s stock transfer policy, which aimed to privatise council housing. To effect stock transfer, there has to be a ballot of council house tenants to determine whether a majority wants it. The Defend Council Housing (DCH) campaigning group argued against privatisation, despite shoestring funding, and fought against much better financed local authorities in these ballots. In many cases, councils were successfully forced to retain their housing stock. In Swansea, for example, a hard-fought campaign by DCH activists defeated a stock transfer plan by Swansea council, despite the latter’s glossy brochures and PowerPoint presentations. It would have been good to see this kind of action acknowledged.

There are several sections of this collection—on feminism, racism, cultural issues and the media—that are very useful. Indeed, a Marxist analysis of Welsh society and politics is long overdue. Unfortunately, this book does not provide it. The book’s lack of acknowledgement of struggle from below is a consequence of another central problem—its unquestioning acceptance of the cultural dominance of neoliberalism. Neoliberalism is described here as “the dominant model of contemporary capitalism” (p10), characterised by privatisation, financialisation and the “internationalisation” of the national state apparatus so that it serves global capital. The problem with this formulation, however, is that neoliberalism is not a self-evident and coherent set of ideas and there is no general agreement on its meaning and significance. The authors seem to have accepted uncritically Michel Foucault’s idea that a new type of individual has developed under neoliberal capitalism: “Neoliberalism has…profoundly changed the way we think about ourselves, and how we view and relate to one another as citizens and as human beings. It is…‘in here’, in our heads and in our souls” (p12). Is this really the case? Workers have not become completely atomised, individualised consumers—they continue to seek solutions through collective action, as the struggles I enumerate above show. Furthermore, neoliberalism is neither omnipotent nor monolithic. Instead of operating as a coherent ruling-class strategy, it is full of inconsistencies and contradictions. Many of these were exposed after the global financial crisis of 2007-8 and the development of the Covid-19 pandemic, necessitating increased state intervention. One example of this was the renationalisation of Welsh railway services in 2021.

More broadly, the authors use of the term “neoliberalism” rather than “capitalism” throughout this book is problematic. There is insufficient space in this review to analyse the ambiguities of terms such as “neoliberal feminism” (p27), “neoliberal logic” (p55) and “progressive neoliberalism” (p39). Nor can I explore adequately its talk of “moving beyond the assumptions of neoliberalism” (p278), and of developing “a collective, social identity that militates against the ‘me first’ neoliberal agenda” (p284). It suffices to say that no real strategies are laid out to achieve these ends. In any case, what is meant by replacing neoliberalism—are we talking about creating a socialist Wales or merely one in which Keynesian capitalism replaces the free market model? The focus on questions that socialists in Wales face is to be welcomed, but answering them means going beyond managing capitalism with an anti-austerity agenda. Instead, we need to recognise the potential of the existing struggles against the capitalism, and how these can challenge the very system itself.

Tim Evans is a writer, poet and member of the SWP in Swansea. He helps to organise the Llanelli 1911 Rail Strike Commemoration as well as the Live Poets Society, a radical poetry collective. He is a member of Unite Community. 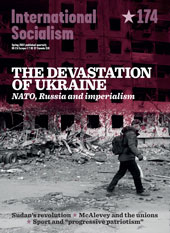