The past quarter has seen the death, after a long and rich life, of the Marxist Chanie Rosenberg, who, together with her partner, Tony Cliff, founded the political tradition in which this journal locates itself. Chanie’s contribution to International Socialism includes a number of articles and book reviews, some written under the pseudonym “C Dallas”, on issues such as the socialist attitude to the education system and the Labour Party’s approach to anti-fascist struggle. Many of her contributions published in this journal and elsewhere are now catalogued on the Marxist Internet Archive: www.marxists.org/history/etol/writers/rosenberg/

Revolutionaries such as Chanie pay little respect to the supposed chasm dividing mental and manual labour, and her contribution spans both. As Roger Cox records in one of the many tributes paid to Chanie (https://socialistworker.co.uk/art/51911/Remembering+Chanie+Rosenberg), she was instrumental in producing the first issues of this journal in the 1950s. Chanie used a small inheritance to buy a hand-operated Roneo Duplicator and typed up over 100 stencilled pages for each issue, as Roger and other young comrades cranked the machine and collated pages.

Another radical figure no longer with us is the anarchist anthropologist David Graeber, who died last autumn. Among other things, Graeber is known for his concept of “bullshit jobs”, in which workers do not recognise their own labour as socially valuable. The concept, understandably, has a wide resonance, but an article in Work, Employment and Society by Magdalena Soffia, Alex Wood and Brendan Burchell suggests that the real picture of attitudes to work is more complex (https://journals.sagepub.com/doi/full/10.1177/09500170211015067).

In fact, only 5.6 percent of workers in Britain report that they “rarely” or “never” feel they are doing useful work, far lower than Graeber suggests. Moreover, this sentiment is concentrated not in spheres such as finance or business administration as Graeber claims but in areas such as manufacturing, sales and refuse collection. The authors suggest a return to Karl Marx’s concept of alienation, in which, regardless of the real social value of work, workers are subject to an external, alien force—capital—denying the worker the opportunity for self-realisation through their labour. In practice, the authors’ use of alienation does not conform to Marx’s view, in which it is an inherent feature of capitalist social relations. Instead, they focus on specific problems in workplaces, “inspired” by Marx’s concept. Nonetheless, as they point out, surveys suggest it is when workers have few opportunities to exercise their skills in an autonomous manner that they are most likely to consider their work “socially useless”.

Regular readers of International Socialism will know that many of our contributors obsessively follow debates about Marx’s “law of the tendency of the rate of profit to fall”. The Review of Radical Political Economics has recently published an article by Junshang Liang which offers some further support for the law (https://journals.sagepub.com/doi/full/10.1177/04866134211005881). Liang extends an earlier two-sector model by David Laibman to show that, in a multisector economy, labour-saving technological change, under conditions of constant levels (or even slightly increasingly) exploitation of workers, the rate of profit will tend to fall. Liang’s article is technical in nature. For more accessible contributions on this and related subjects, it is always worth checking Michael Roberts’s blog (https://thenextrecession.wordpress.com). He has two recent contributions on debates about Marx’s law, the first a comment on the “Global Marxism” series of talks organised by South Korean Marxists and a second that shows the extent to which capitalist investment follows shifts in the rate of profit, a key claim of Marxist political economy.

Lastly, a new documentary about the great Marxist philosopher Georg Lukács is now available online (https://vimeo.com/ondemand/georgthedocen). Georg celebrates Lukács’s enormous contributions to philosophy and literary theory through a series of interviews with some of the many influential radical thinkers inspired by him. These include important Hungarian writers such as Ágnes Heller, a post-Marxist philosopher who sadly died in 2019, who chronicle Lukács’s strained and contradictory relationship to the Stalinist cultural and political establishment of the Eastern Bloc. Other contributors include the Trotskyist writer Michael Löwy, who has taken up and developed some of Lukács’s insights into the reactionary ideology of “romantic anti-capitalism”, and the French Marxist thinker Jacques Rancière. Georg also details the attempts by the right-wing government of Viktor Orbán and the fascist Jobbik party to extinguish the memory of Lukács in Hungary, removing statues of him and closing the archive of his work. In the face of these moves, the filmmakers’ desires to show Lukács’s continuing relevance to the struggles against capitalism and fascism are highly valuable. 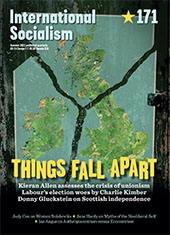