One of the more depressing aspects of Pick of the Quarter in recent times has been the necessity to mark the passing of a number of fine Marxist authors. That is particularly true of the generation of socialists who were able to witness and participate in the struggles of the late 1960s. Leo Panitch, a student at the London School of Economics in 1968, and a distinguished Canadian Marxist scholar and activist, died of viral pneumonia associated with Covid-19 in December, just after our winter issue went to press.

Panitch is well known for his work as editor of Socialist Register, and that journal has now made work spanning five decades by him available (https://socialistregister.com/index.php/srv/announcement/view/806). Panitch and his co-author Sam Gindin engaged in a vigorous debate on the nature of imperialism with former International Socialism editor Alex Callinicos, including in the pages of this journal. As well as writing on imperialism and economic crises, Panitch was a leading exponent of an approach to achieving socialism through an “in and against the state” strategy. He debated this approach, again with Callinicos, last year (www.youtube.com/watch?v=LCBCeiuby3Y).

Some of Panitch’s articles question the usefulness of the distinction between reform and revolution, set out by Rosa Luxemburg’s famous pamphlet, and adopted by the tradition associated with this journal. A similar questioning of these categories was offered by Ed Rooksby, a much younger socialist, just 46, who died in February. Some of Rooksby’s writing, including his poignant final piece on living with long Covid, are available on his blog (https://edrooksby.wordpress.com). A wide-ranging interview with him is also available from Tribune (https://tribunemag.co.uk/2021/02/remembering-ed-rooksby).

In January, we lost another socialist thinker, Mick Brooks, who died of complications due to Covid-19. Brooks was radicalised at an early age by the Vietnam War. From the 1970s onwards he was committed to popularising Marxist political economy for a working class audience. He published a book, Capitalist Crisis: Theory and Practice, in 2012 and wrote widely for the socialist press, most recently Labour Briefing.

On a more cheerful note, someone who is very much still with us is Talat Ahmed, one of our editorial board members. Talat has recently appeared as a guest on the Jacobin Radio show, associated with the magazine of the same name, to talk about her book Mohandas Gandhi: Experiments in Civil Disobedience (https://blubrry.com/jacobin/75131849/long-reads-talat-ahmed-on-gandhi-and-the-politics-of-sainthood).

Finally, there is an interesting article by Costas Lapavitsas and Nicolás Aguila, contrasting the Marxist theory of money with that expressed by Modern Monetary Theory (MMT), a doctrine now popular among sections of the left (https://developingeconomics.org/2021/03/17/monetary-policy-is-ultimately-based-on-a-theory-of-money-a-marxist-critique-of-mmt). This is based on a recent article in The Japanese Political Economy (volume 46, number 4). The authors argue that, while MMT treats money as simply a unit of account created by states, for Marxists money emerges in its most developed form in a society based around generalised commodity production—capitalism—with states seeking to shape how money is used within that context. 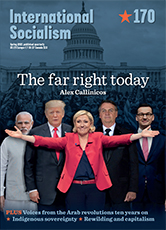