David Harvey has, for some time, been among the most prominent Marxist political economists and an important figure in popularising Karl Marx’s Capital through his writings and online lectures.

Over the years, Harvey has shifted seemingly ever further from a position that emphasises Marx’s “law of the tendency of the rate of profit to fall” as a key driver of economic crises in favour of a more multi-causal explanation. Now he has sought to generalise this argument with a piece in the July/August New Left Review entitled “Rate and Mass”. Harvey starts from the perfectly valid argument that an emphasis on “rates” can be misleading. A 1 percent increase in income means something different for someone earning a dollar a day and someone earning thousands. The absolute expansion of the Chinese economy is greater today, at lower rates, than it was before the 2008-9 crisis when it was growing at double-digit rates.

However, in extending this point to debates about Marx’s law, Harvey does Marxist political economists a disservice in suggesting that they have ignored the possibility that the mass of profits can grow in parallel with a declining rate of profit. It may be true, as Harvey argues, that, faced with declining profitability, firms expand production, raising the amount of labour exploited and increasing the mass of profit. However, it may also be the case that declining profitability deters capitalists from investing—and ultimately profit rates can become so low that a collapse in absolute profits occurs for many capitalists.

Michael Roberts has published an excellent response to Harvey on his blog, which makes these and other points (https://thenextrecession.wordpress.com/2021/08/25/the-rate-and-the-mass-of-profit). Interestingly, as Roberts notes, Harvey also now seems more convinced than in earlier work about the empirical reality of declining profitability.

Adding to Roberts’s criticisms, we would also suggest that Harvey’s comment that “studying the management of capital’s crisis tendencies should focus on the economic role of military expenditures” in reducing the build-up of unprofitable capital will not come as a revelation to readers of this journal. Our previous issue contained a major study of Mike Kidron and his theory of the “permanent arms economy”, which did precisely that.

The latest issue of Irish Marxist Review includes a fascinating article by Seán Mitchell on the history of liberal strands of Northern Irish unionism. The context for this is the recent coronation of Jeffrey Donaldson as the new leader of the Democratic Unionist Party (DUP). Donaldson is an unlikely liberal reformer; a former soldier in the Ulster Defence Regiment, he cut his teeth as a constituent agent for the infamous racist Enoch Powell. Nevertheless, he has struck a different posture to his ultra-conservative predecessor, Edwin Poots, by seeking to present a modern face of the DUP, for instance, by meeting with LGBT+ advocacy groups.

As Mitchell explains, this modernising turn has little to do with Donaldson’s political pedigree or deeply held beliefs and much to do with the existential crisis that unionism is faced with today. The Northern Irish statelet has been celebrating the first century since its foundation this year, but there are signs that it may never celebrate a second. Popular identification with unionism is in decline and just 17 percent of those aged 18-24 regard themselves as “British”, while the prospect of a “border poll” on Irish unification looms ever larger. Moreover, unionism is fragmenting, with more liberal Protestants increasingly looking to the non-sectarian Alliance Party and the DUP’s hardcore loyalist base leaking towards the more hardline Traditional Unionist Voice. Amid this historic crisis of unionism, Donaldson is eager to stake out a place in the “centre ground” of Northern Irish politics, building support outside the traditional base of the DUP in order to head off the danger of unification with the South. This means appealing to more liberal Protestants who have been alienated by the reactionary social policies and Christian fundamentalism of the DUP, and even reaching out to Catholics who may prefer to remain part of the Union due to perceived economic or social benefits.

Building on an analysis of the organic crisis of unionism, which was skilfully set out in International Socialism 171 by Kieran Allen, Mitchell looks at the history of unionist attempts to build a non-sectarian, liberal ideological foundation for the state. The key figure in this history is Terence O’Neill, who was Prime Minister of Northern Ireland during the 1960s. O’Neill’s liberal unionism was ultimately torn apart by the advent of the Catholic civil rights movement and the Troubles in 1968. By investigating how the “modernisation” projects of figures such as O’Neill and, later, Northern Ireland’s First Minister David Trimble failed, Mitchell hopes to sketch out some of the problems that will face Donaldson on the rocky road ahead for unionism. 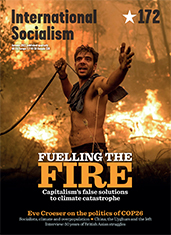