The editors of International Socialism were saddened to hear of the death of Neil Davidson in May. Neil was a member of our editorial board from 2005 to 2013. He was a sharp Marxist thinker, who produced an extraordinary body of writing on themes such as Scottish nationalism and the nature of bourgeois revolutions. This includes the books Discovering the Scottish Revolution 1692-1746 (Pluto, 2003) and How Revolutionary Were the Bourgeois Revolutions? (Haymarket, 2012).

The forthcoming publication of two posthumous volumes by Neil will hopefully give us the opportunity properly to review his work in a future issue. Meanwhile, Historical Materialism journal has compiled a collection of Neil’s work available online: www.historicalmaterialism.org/index.php/blog/neil-davidson-1957-2020

Unsurprisingly, the past quarter has seen a huge output from left-wing journals and websites on various aspects the Covid-19 crisis. These include a piece on The Bullet by Raju Das (https://socialistproject.ca/2020/06/pandemic-and-the-need-for-new-society). Das takes the opportunity to discuss how production, and society more generally, could be organised under socialism. In a similar vein, in Le Monde Diplomatique Benjamin Selwyn analyses the problems with Britain’s food system, which contributes to ecological destruction, climate change and the emergence of pandemics. He makes a case for collective food provision through community restaurants (https://mondediplo.com/outsidein/uk-food-inequality-community).

Issue II/122 of New Left Review offers a series of short takes on the impact of Covid-19 around the globe, including one by the always incisive Mike Davis. The issue also contains an interesting article by Owen Hatherley on the evolution of London, a city that has a disproportionate dominance over the country relative to other capitals elsewhere in the world. Alongside the conventional narrative of London’s development, and an explanation of the way its role as a global financial hub has shaped its geography, he highlights the often ignored impact of local social-democratic governance—whether the early “municipal socialism” of the early 20th century, or the later Greater London Council and Greater London Authority administrations associated with Ken Livingstone.

Also in New Left Review, Marco D’Eramo responds to the controversy generated by the intervention of Italian legal philosopher Giorgio Agamben into debates about coronavirus and the lockdown. Agamben has built up considerable influence among political theorists with his analysis of the “state of exception”—the tendency of modern states to suspend the rule of law and grant themselves emergency powers through appeals to exceptional dangers to society. His conceptualisation of refugee camps and detention centres such as Guantanamo Bay as zones of “bare life”, in which individuals are excluded from the rule of law and turned into “killable bodies”, has inspired many recent analyses of migration and the war on terror.

Nevertheless, Agamben shocked many of his admirers in February when he published a provocative article in il manifesto entitled “The Invention of an Epidemic”. There, he claimed that the lockdown restrictions in Italy were a “disproportionate reaction” to a disease that is “not too different from the normal flu.” Articulating the sort of conspiratorial thinking that we have also seen from the US far right, he argued that the panic caused by Covid-19 had been intentionally whipped up by the state in order to justify seizing new powers and extending surveillance. Although Agamben’s astonishing intervention was met with stunned shock from many quarters, D’Eramo claims that it has discernible roots in his philosophy—and particularly those parts of it drawn from Michel Foucault. D’Eramo argues that both Foucault and Agamben exemplify a one-dimensional understanding of domination as control and surveillance by disciplinary institutions that is characteristic of much post-structuralist philosophy. What such approaches overlook is the other important element in modern social domination—exploitation. In this context, it is less surprising that Agamben sees lockdown merely as an imposition into the rights of the individual and not a protection against being forced into unsafe work.

US journal Jacobin has published a lengthy review article by the socialist historian Kevin Murphy on Yuri Slezkine’s The House of Government. Slezkine’s book explores the lives of the Communist elite through the prism of the Moscow “House on the Embankment” where many of them lived (www.jacobinmag.com/2020/04/yuri-slezkine-the-house-of-government-review). Murphy acknowledges the richness of the historical material, which fills a “huge gap in the history of Stalinism”. However, he also skewers Slezkine’s acceptance of Cold War myths, such as the concept of an essential continuity between the revolution of 1917 and the subsequent Stalinist regime, and his depiction of the Bolsheviks as a “millenarian sect”. 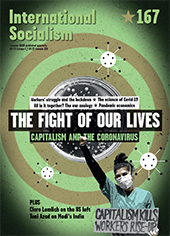