For readers who know little of India’s history and its “founding father”, Mohandas Gandhi: Experiments in Civil Disobedience is an excellent choice. Talat Ahmed provides a detailed and comprehensive, yet accessible narrative that weaves together an account of Gandhi’s life with the historical, cultural, political, social and economic realities of his time. This creates a multilayered tapestry that chronicles the events and ideas that shaped Gandhi’s life. Importantly, Ahmed both defends and challenges aspects of his legacy.

Gandhi has been heroised, romanticised and sanitised. He has been called a father, a leader, a saint and a revolutionary. It is this final claim that Ahmed addresses and counters most clearly. She traces Gandhi’s life from his birth in 1869 to his assassination in 1948. In a set of rich early chapters, Ahmed tells the story of how Gandhi was born a “middle-class and middle-caste Hindu”, before studying law in London and going on to practice in South Africa. There, he first experienced systemic racism and began his life as an activist. In 1915 he returned to India as the “champion of the oppressed” (p56).

Despite his privileged upbringing, Gandhi is often remembered as “a man of the people”. Certainly his dedication to challenging the oppression of the “dalits” or “untouchables”—the lowest caste in India—justifies this to some degree. Nevertheless, there were always limitations on Gandhi’s activism, some of which flowed from his class status. However, these limitations were also related to those who influenced his ideas: the Russian author and Christian pacificist Leo Tolstoy, the prominent social thinker and philanthropist John Ruskin and the US philosopher Henry David Thoreau, who wrote the seminal 1849 essay Civil Disobedience. Coupled with his Hindu theology, these influences shaped an approach that was more philosophical and moralistic than socialist and revolutionary.

This showed, for example, in Gandhi’s rejection of movements that directly challenged capitalist interests. For him, working-class projects such as the All-India Trade Union Congress “antagonised employers by preaching class warfare” (p94). Ahmed’s book highlights the contradictions that Gandhi was consistently faced with as he attempted to unite the forces of national liberation in the absence of an analysis of the relationships between classes in Indian society.

As the book’s title suggests, Ahmed pays particular attention to Gandhi’s theory of non-violence, analysing its effectiveness and limitations. This is timely. Non-violent resistance strategies have enjoyed a resurgence in popularity through movements such as Extinction Rebellion. Moreover, discussions of violence and non-violence expose fundamental questions about the tactics that are needed today in the struggles taking place around the globe. The Black Lives Matter movement in the United States, for example, has thrown up debates about the legitimacy and effectiveness of rioting as a tactic and how it is possible to resist armed fascist groups. These themes have been developed in this journal by Martin Empson’s detailed and excellent Non-violence, Social Change and Revolution (International Socialism 165), which draws on Ahmed’s work.

Civil disobedience and non-compliance can play an important role in resistance, and Ahmed provides many inspiring examples of the effective use of Gandhi’s methods. Principled defiance of the law is difficult and courageous. Nevertheless, throughout history, these weapons alone have fallen short. As Ahmed illustrates, civil disobedience and non-compliance can only take us so far because the enemy will always refuse to play by the same rules.

Under Gandhi’s instruction, followers were forbidden from even defending themselves. Many died as a result. Others fought back. Gandhi believed that this was a moral issue. He saw the capacity of an individual to engage in non-violent action in a disciplined fashion as tied up with their understanding of “satyagraha”, one’s ability to “hold to the truth”.

When movements went beyond his control, Gandhi called them to an end. For instance, he halted the national non-cooperation movement of 1922, suspending disobedience and beginning a personal hunger strike as penance for the violence that had been “used in his name”. Unfortunately, he failed to condemn the state for its violence against protesters. Ahmed explains, “Gandhi’s position was always to condemn violence, but he was particular about who was to blame for it” (p91).

Perhaps the clearest revelation of the limits of Gandhi’s political methods occurred during the mutiny of the Royal Indian Navy in Mumbai in 1946. Ahmed’s account of the events is electric. The mutineer’s militancy, the breadth of their support and the defiance of Indian workers created a powerful uprising. Vitally, it was rooted in class unity and cut across religious divides between Hindus, Muslims and Sikhs. It was also incredibly effective. Ahmed argues that the mutiny was the decisive event in forcing the British out and a defining moment in realising an Independent India. Yet despite the importance of the mutiny, it was not supported, let alone led, by Gandhi.

Ahmed also takes us through fascinating accounts of Gandhi’s life that reveal some of his less than admirable positions on race and religion, women, poverty and oppression, as well as his insights into patriotism and imperialism.

The issue of religion is particularly pertinent in India today. Religion had not historically been a defining, let alone dividing feature in India. Often identity has been dominated by other factors such as region and language or dialect. It was during the the 20th century that religion became an increasing source of tensi0ns. Many Muslims fought for British imperial interests in the First or Second World Wars, and yet would still be denied equal rights when they returned home to India. The minority Muslim population responded by reasserting themselves through organisations such as the Khilafat movement and the Muslim League. By the mid-1920s religion was firmly planted on the political agenda.

Ahmed explains that Gandhi “held all faiths to be equal, believing that they were different paths to the one god and salvation” (p84):

The championing of oppressed groups was essential to Gandhi’s prognosis for Indian nationalism and so Hindu-Muslim unity was a central objective. He understood that a united front against the British Empire had to be fought for. (p85)

This led Gandhi to support Muslim groups that fought religious oppression. Nevertheless, he failed to challenge his own party, the Indian National Congress (INC), as it shifted from cross-communal unity towards a more nationalistic, anti-Muslim position. This repositioning paved the way for the partition of India and Pakistan in 1947 and the explosion of brutal religious violence that followed. Displacing some 10-12 million people along religious lines, partition continues to provide the backdrop for the tensions between Hindus and Muslims in India today.

Although the INC went on to rule India for 55 of the 73 years since indepedence in 1947, today they have been displaced as the largest party in the Lok Sabha, the directly elected house of the Indian parliament. Instead it is the Bharatiya Janata Party (Indian People’s Party, BJP) and its prime minister Narendra Modi who run the Indian federal state today. The BJP is a pro-business Hindu nationalist party and its national election victories in 2014 and 2019 relied heavily on anti-Muslim propaganda. Modi’s celebrity-like status and popularity, as well as the enormous donations that he attracts, have boosted the BJP’s membership to more than 110 million. Today, it is the largest political party in the world.

Modi’s early allegiance was to the Rashtriya Swayamsevak Sangh (RSS), a fascist paramilitary organisation that promotes the “Hindutva” Hindu nationalist ideology and sees the BJP as its political arm. Although there is a tension between Modi’s RSS membership and his role as prime minister, he has nevertheless used his position to push the Hindutva agenda. A recent example of this is his introduction of the Citizenship (Amendment) Act, which extended citizenship to Hindu and Buddhist migrants from Bangladesh but denied the same rights to Muslims. Modi’s desire to marginalise Muslims and promote an ethno-nationalist vision of India’s future has drawn comparisions with Zionism. Likewise the subjugation of the Muslim-majority territory of Jammu and Kashmir has led some to compare Modi’s India with the Israeli apartheid state. As Raju Das suggested in a recent article in this journal, the “supremacist zeal” of the BJP’s Hindutva means:

There will be deeper connections between India and Israel. India will fast become like Israel. We might see the emergence of an “Indian Zionism”… Jammu and Kashmir is fast becoming a South Asian Palestine. Without any consent from Kashmiris at all, the BJP government has taken away their legal autonomy.

Opportunities exist for the Indian left, but it remains weak. Partition and religious turmoil has left a deep scar on Indian society. Some of these problems are rooted partially in the sort of movement that Gandhi built and the type of society that emerged from the independence struggles that he was so central to. Of course, it is right to recognise the truly inspiring contribution of Gandhi, but an honest critique is also necessary. Ahmed does this with sensitivity but without sentiment.

Nonetheless, this is no time to dismiss non-compliance. The collective refusal to return to unsafe workplaces or to send children into unsafe schools has been a feature of popular resistance to governments that have mishandled the Covid-19 crisis. However, neither is it a time to limit our expectations for a better world. The people of India have independence, but they are not truly liberated. Inequality and poverty reign. Extreme nationalism, rooted in the powerful fascist RSS organisation, is a part of mainstream politics, and the everyday horrors of capitalism continue. Marxists understand that any effective attempts to challenge or undermine the current capitalist system will be met with the severest response from the state. Age old tactics of divide and rule are used as much today, in the face of the crisis of neoliberalism, as they ever were. Brutal state repression continues to suppress uprisings across the globe, and a creeping authoritarianism can be discerned as the system reels from the shock of coronavirus.

If we are to apply the lessons of history and thus avoid repeating its darkest moments, an earnest and honest critique of figures such as Gandhi is vital. Ahmed has provided a detailed and balanced account of his life and thought from a Marxist perspective. This is a worthy read for anyone grappling with a way forward today. 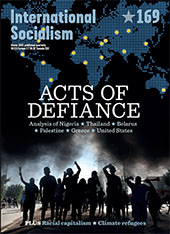