Joshua Clover identifies a cycle of struggle occurring over the centuries which he categorises respectively as riot, strike and “riot prime”. Riots first occurred in times when states had not yet developed an industrial working class. The hub of social contention was often the marketplace, where E P Thompson’s “moral economy of the crowd” involved large groups acting together to set food prices, or the city square where crowds demonstrated for political rights. These were not easily containable events—London’s 1780 Gordon Riots foreshadowed the French Revolution, and Manchester’s 1819 Peterloo Massacre terrified the bourgeoisie by the sheer scale of the masses mobilised around demands to extend the vote.

The era of the strike is revealed by the shift in the focus of class struggle from the market and the streets to the factories, mills and mines. As industry grows into engineering ships, trains and cars so the strength of the working class is revealed to be in its ability to organise and threaten collectively to withdraw labour. Clover describes this era as encompassing the 19th and 20th century. The author is refreshingly wholehearted in his support for overturning society but, as with many anarchists, believing in the power of a general or mass strike seems to mean that he sees more limited industrial action as counterproductive. Clover paraphrases syndicalist philosopher Georges Sorel: “Sorel sets the proletarian general strike against the limited or narrow strike, suggesting that the latter offers partial satisfactions and gains that serve to dim revolutionary fervour” (p96).

This is an idealist position, ie it counterposes an ideal action—all workers fighting together with a smaller one—a group of workers striking. Obviously socialists prefer a bigger to a smaller action, but do we really believe that the smaller one “dims revolutionary fervour”? Clover champions Rosa Luxemburg’s writings on the mass strike, but these contradict his own argument as they demonstrate “how the internal spread of the strike becomes possible” (p100). It appears that it occurs from below as more limited strikes deliver “partial satisfactions”, which enlighten the workers’ sense of what is possible and can lead on to a broader and revolutionary mass strike such as in Russia in 1905.

In the United States in the 1960s a wave of riots exploded out of the overwhelmingly black ghettos of dozens of cities: “the sixties give rise to a unique situation of riot and strike, one that is at its most concentrated in Detroit”. Clover notes “the sheer nearness of the two forms of collective action—their coexistence, adjacency, confrontation” (p105). At the end of the post-war boom, “we see two trends: a still-dominant manufacturing economy internalising black labour, but beginning to decline… This implies an increase in both employed and surplus black populations…the trendlines cross like wires sparking and Detroit sees the intensification of conditions for both riot and strike” (p117). We read of the different tactical arguments of the Black Panther Party and the League of Revolutionary Black Workers trying to take the struggle forward in the streets and on the factory floor respectively.

For me this was the most interesting section of the book: Clover sees these events as a vindication of his “baseline formulation of riots and strikes as circulation and production struggles respectively” (pp120-121). Half a century after the 1967 Detroit insurrection, he argues, deindustrialisation has removed the working class—black and white—from the sort of stable jobs necessary to organise unions and fight for better conditions with the strike weapon, due to “the initial and veiled decline of the US and global production, the germinal shift of bodies and capital into the world of circulation” (p121). He believes work is becoming increasingly precarious and therefore workers cannot ­struggle for reforms.

Clover defines circulation as “in the concrete sense: transport, communications, finance” (p140). But these all require an industry of people to carry them out. The growth of service industries as an employer of all classes is still dominated by the working class. Take the industry which encompasses part of the first two sectors—logistics. Clover admits that: “the 1997 UPS strike shows such things are possible…labour actions will shift toward circulation struggles” (p144) but he still discounts class struggle in logistics despite describing its existence. Confusingly, he argues that “the circulation struggle has no logical requirement that its participants be workers” (p151). The biggest “circulation” struggle in the US in recent years has been the heroic fight for $15 an hour waged by fast food workers who actually produce goods and whose example shows that workers can still make gains when well organised. However, for Clover the working class “no longer exerts a peculiar power over capital”; therefore “such a course of struggle is foreclosed” (p149).

Given the historically low level of strikes in the US and Britain, Clover’s emphasis on the new prominence of the riot in contesting capitalist rule seems to be borne out by the statistics. Media images of struggle since 2011 have been dominated by the street as opposed to the workplace, thus Clover’s label of “riot prime” for this new era of uprisings. Moreover, the role of governments in enforcing austerity and the police in racist violence has shown protesters the value of street protest. Under Donald Trump and Theresa May this is unlikely to change. But class struggle in either services (circulation) or manufacturing industries persists and rumours of the end of the strike are much exaggerated. They have been at the heart of epic struggles in Greece, the French spring of 2016 and even the battles of the precarious or gig economy involving logistics workers in Italy and the UK in recent months.

Matt Clement is a member of Southampton SWP and lectures in Criminology at the University of Winchester. He has recently written A People’s History of Riots, Protest and the Law: The Sound of the Crowd. 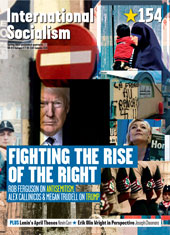