New Left Review continues its heavyweight analysis of the United States. Following Mike Davis’s detailed appreciation of the deeper forces behind Barack Obama’s re-election, Perry Anderson kicks off its latest issue (II/81) with a more long-term historical interpretation.1 Affirming a more robust Marxism than usual, he argues that “the historical regime of accumulation” is “far the most fundamental determinant” of the American political system. He contends that the continuing economic crisis shows that the neoliberal regime of accumulation forged under Ronald Reagan in the 1980s faces a “system-wide deadlock”.

But Anderson is dismissive of Occupy, whose demands he argues were appropriated by Obama, and contemptuous of the “culture wars” between Democrats and Republicans equally wedded to capitalism. Obama’s success in hoovering up corporate donations “reflects rational calculations of which is the better stabiliser of capitalism in a period of turbulence, when the economy needs further pump-priming and society a rhetoric of diversity and inclusion”.

Anderson’s views on the European Union—similarly dismissive of the capacities of ruling and subaltern classes alike—are subjected to critical scrutiny by Alex Callinicos in the forthcoming issue of Historical Materialism. The current issue (20.4) includes a major article by Murray Smith and Joseph Butovsky that provides yet more evidence that the crisis can only be understood starting from Marx’s law of the tendency of the rate of profit to fall. Other articles include Derek Boothman on Gramsci’s writings on the Islamic world, Charlie Post on Robin Blackburn’s The American Crucible, and Laura Corradi on a massive study of state racism in Italy edited by Pietro Basso.

The latest International Socialist Review (May-June) includes part two of Lee Sustar’s examination of working class organisation in the US. In the article Sustar looks at the significance of the recent Chicago Teachers Union strike for a labour movement that has continued to lose members and political clout even as the economy recovers.

Elsewhere in the issue is an interview with Vivek Chibber on Marxism and postcolonial studies, their different approaches to explaining capitalism and anti-capitalist strategy, engaging with the non-Western world, and the role of radical intellectuals.2 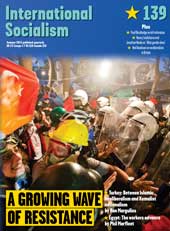