December’s Monthly Review leads with an article by John Bellamy Foster, Brett Clark and Hannah Holleman on “Capitalism and Robbery”. The authors address the concept of “expropriation”, the processes of robbery, including the dispossession of the peasantry, the effects of colonial conquest and the depletion of natural resources which formed—and continue to form—the preconditions for capitalism. They remind us that although the concepts of exploitation and expropriation remain analytically distinct, there is a dialectical relationship between expropriation without compensation and the exploitation of paid workers. This analysis leads them to argue that ecological breakdown, racism and oppression are not “accidents” incidental to how capitalism works but fundamental to it. The article employs some illuminating case studies drawn from Holleman’s work on the 1930s Dust Bowl crisis in the United States and Clark’s research on the global fishing industry.

December’s issue also features Mark Jay on incarceration in the US and the November issue includes Foster on the year of protests over climate change. Foster calls for support for radical interpretations of the demand for a Green New Deal, calling it a revolutionary reform that socialists should support even though it does not represent, in itself, a break with capitalism.

The November issue of Irish Marxist Review is a special climate issue. Alexandra Day has contributed an account of how climate change is exacerbating pre-existing injustices and sharpening social tensions in Palestine. Located in one of the hottest regions in the world, Palestine is experiencing increasing temperatures and declining rainfall, which means that access to water is a central issue for Palestinians. The destruction of infrastructure in the Gaza Strip by the long-running siege and regular Israeli bombing means that hospitals don’t have enough access to water to carry out basic tasks such as sterilisation of medical equipment, while some 12 percent of infant mortality in Gaza is caused by drinking contaminated water. In the occupied West Bank, rooftop vats used to collect rainwater by Palestinians are both restricted legally by Israeli permits and targeted with impunity by violent settlers. Day argues that the fact that Israelis consume four to five times more water than Palestinians in the occupied territories is a striking example of how climate change is experienced unequally by different populations, and how the ecological crisis is interacting with imperialism and settler colonialism.

Elsewhere in Irish Marxist Review, Eddie Conlon addresses the Irish government’s Climate Action Plan, arguing that it is both unambitious and reliant on failed, market-based solutions to the ecological crisis. As governments around the world feel the pressure of the new movements against climate change, Conlon’s article is a useful insight into how the establishment in Ireland is responding to increased environmental consciousness while trying not to disturb the status quo. Meanwhile, Owen McCormack looks at the new technologies that are being counterposed to social transformation as a way out of the climate crisis, such as carbon capture and storage and geoengineering.

The autumn issue of New Left Review (II/119) is dominated by a monumental—nearly 50-page long—article by its former editor, Perry Anderson. The title—“Situationism À L’Envers?”—is almost unintelligible, even when translated (“Situationism Upside Down”). But the subject—a lengthy review article of the economic historian Adam Tooze’s Crashed, a mammoth history of the financial crash and its aftermath—is important. Anderson sets the book in the context of Tooze’s two earlier works, The Wages of Destruction, about the Nazi economy, and The Deluge, on the First World War and what followed. Running through the three books is a commitment to the idea of a liberal international order managed by the US—indeed Anderson says “the trilogy… is star-struck by America.” He has, as one would expect, some harsh and perceptive things to say about this ideological orientation and about the elitist defence of the status quo to which this can lead; he notes Tooze’s remark that “there are good reasons to defend technocratic government against the unreasoning passions of mass democracy.” Anderson also criticises his “situational and tactical” approach to writing history as “premised on repressing structural explanation” (hence the article’s title). This too is a fair point but it would be more convincing if Anderson had a developed structural analysis of the crisis of his own (rather than selectively drawing on Robert Brenner’s). Moreover, the article, except perhaps in its length, is rather un-generous. Tooze is indeed a left-liberal, but an open-minded one who seriously engages with the ideas of the left—including those of Lenin and Nikolai Bukharin in The Deluge—and there is much to learn from Crashed. But the article certainly shows Anderson firing on all cylinders at the age of 81. 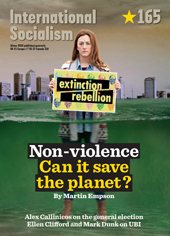