The editors of International Socialism were sorry to hear that Marxist economist John Weeks had died at the age of 79 from leukaemia. In 1990 John established the Department of Development Studies at the School of Oriental and African Studies in London. Together with the university’s Economics Department, this created one of the few academic spaces in Britain that promoted the discussion of heterodox and, in particular, Marxist political economy. John himself made important contributions to those discussions. His Capital and Exploitation, published in 1981 by Princeton University Press, was read by and influenced each of the three most recent editors of International Socialism. In 2014, a new edition, extensively rewritten to reflect the author’s changing views, was published.

A couple of John’s articles have now been made freely available online by Historical Materialism journal (http://www.historicalmaterialism.org/news/remembering-john-weeks). For those able to access them, some of his early articles on development from other journals, often co-authored with Elizabeth Dore, his partner, are also well worth a look. This includes a 1979 article, “International Exchange and the Causes of Backwardness”, published in Latin American Perspectives, which challenged versions of dependency theory that saw exploitation as a relation between nations, rather than one between classes.

Another interesting document, this one newly rediscovered, from another author sadly no longer with us, has found its way to us. In 1968, Chris Harman, produced A Revolutionary Socialist Manifesto for the International Socialists, the forerunners of the Socialist Workers Party. Apparently a vote to publish it was lost at the group’s executive, and the document was instead referred to the “political committee” for further consideration. A copy remained in the archives of the late Colin Barker, and it has now been unearthed and published on the Marxist Internet Archive by John Rudge (https://www.marxists.org/archive/harman/1968/06/manifesto.html). It is an interesting insight into the politics of the group during a tumultuous year from one of its leading members.

From an interesting historical find, to a piece of sharp contemporary relevance: Rebecca Gould has written in The Political Quarterly (https://onlinelibrary.wiley.com/doi/full/10.1111/1467-923X.12883) on the International Holocaust Remembrance Alliance (IHRA) definition of antisemitism. Gould shows that the widespread adoption of this definition, and more importantly the 11 “illustrations” that conflate antisemitism with anti-Zionism, is being used to suppress criticism of Israel. This phenomenon is well-known in Britain, where the IHRA definition featured heavily in the attacks on Jeremy Corbyn during his leadership of the Labour Party. However, Gould argues, it is being adopted far more widely than that, silencing Palestinians, along with their supporters, and erasing their oppression from the discussion.

There is an interesting piece by left-wing sociologist Göran Therborn on the global middle class in the July-August New Left Review (II/124). Therborn points to growing discussion, in many regions, of what organisations such as the World Bank, and publications such as the Economist, dub the “middle class”. As Therborn points out, much of the growth of this group involves no change in the class position of populations at all—merely a modest rise in income. In the case of Asia, one World Bank publication included in their definition anyone with a daily income of $2-13.

By contrast, in the countries that were historically the most wealthy, such as those in North America and Europe, there has been concern that the “middle class” (again, often flimsily defined according to income) is losing out to the super-rich. Therborn does not really engage with the debates within Marxism about defining the middle class, which are extensive. However, he does show that, even defined in income terms, the middle section of the population in countries such as China and India have, together with the poorest, seen their income fall relative to that of the wealthy. He ends by criticising the ideological inflation of this “nebulous entity” by commentators who want to dismiss discourse focused on the working class. 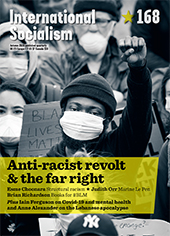