What was the origin of those characteristic features of modern capitalist society, private property, class divisions, the state, the nuclear family, the oppression of women? This is a question which mainstream sociology and social anthropology refused even to consider throughout most of the 20th century. They dismissed attempts by mid and late 19th century thinkers to study ‘social evolution’ as pure speculation, consigning to the same theoretical rubbish heap Spencer, Morgan, Marx and Engels. Instead sociology concentrated on the search for the holy grail of general laws applicable to all societies and, in doing so, saw today’s institutions, exploitation and oppressions as existing throughout human history and prehistory.

Anthropology devoted itself to the study and understanding of particular cultures and societies and, if it went beyond that, tried to emulate sociology in seeking abstract principles of structure to be found in all of them. Anyone who raised such notions as ‘primitive communism’ was marginalised as regressing to ‘19th century’ speculation or as a ‘doctrinaire Marxist.’ In this way, the disciplines provided academic backing for blaming all the horrors of the world on some unchanging human nature. Then in the late 1960s the eruption of revolt across the world caused a new questioning of orthodoxies. People like Eleanor Leacock (driven from academic life by McCarthyism in the 1950s) and Richard Lee (radicalised by his involvement in the struggle against the Vietnam War) showed that classes, the state and women’s oppression did not exist in societies based on foraging (‘hunting and gathering’) and horticulture. Even then, however, the old orthodoxy remained quite widespread, influencing some of the fashionable ‘structuralist’ Marxism of the 1970s.

Yet throughout this whole period there was a powerful trend in archaeology that did examine the evolution of society. In part this was because of the nature of the work archaeologists undertake. As they dig deeper they often find the remnants of older human habitations underneath later ones—with simpler tools, smaller settlements, and indications of a much more egalitarian distribution of wealth. It is difficult not to see some patterns of societal evolution.

But there was also another important factor involved. This was the influence of one man, the Australian archaeologist V Gordon Childe. He was a dominant figure in British archaeology from the 1920s to his death in the late 1950s, and his influence persisted long after that. He was also a left wing socialist (his first book, in the early 1920s, expressed his disillusionment with the policies in power of the Australian Labour Party) and took seriously the ideas of Marx, Engels and the pioneering American anthropologist who influenced them both, Lewis Morgan. His scientifically rigorous and popular books like Man Makes Himself, What Happened in History and Social Evolution show how, through the archaeological record, one can trace the emergence of male supremacy, classes and the state through two great ‘revolutions’ in social life (the ‘neolithic’ and the ‘urban’).

But Gordon Childe necessarily left many questions unanswered. He was also limited by the scientific techniques available at the time. So his dating of important artefacts has had to be revised and his view of the diffusion of cultural patterns in early western Europe has proved to be wrong. The study of social evolution today has to acknowledge an enormous debt to Gordon Childe, but it also has to go beyond him.

A number of archaeologists—and occasionally anthropologists—have taken up this challenge. In this very important book Thomas Patterson shows how. He details their critical engagement with Marxism—sometimes very sympathetic, sometimes much less so—and how this has led them to attempt to explain the emergence of class-divided societies and states out of egalitarian societies. He provides an account of contending theories and of the findings from important case studies. In doing so, he shows that the Marxist approach is neither out of date nor ‘doctrinaire’, even if Marx, Engels or Childe were wrong on particular issues.

My only minor quibble with the book is that it is too short! As a result, although Patterson’s prose is unusually clear for an academic these days, his summary of other people’s views is sometimes too condensed to grasp them easily. He refers to issues like those of ‘chieftanships’ and ‘big men’ in ways that a general reader not acquainted with anthropological material might find difficult to follow. I also feel that he does not write enough about those other anthropologists who have moved to take Marx seriously. And I would have liked much more detail on some of the case studies he refers to. Often the book is more a guide to where to find fascinating material rather than an exposition of that material.

But none of this detracts from the book’s importance and utility. When I first tried to defend a Marxist perspective on the evolution of society in the early 1980s, it meant trawling through journal indexes and library catalogues to find studies by people often working without knowledge of each other in different niches of academic life. Patterson has drawn a lot of these together, and in doing so has made a very important contribution to theoretical understanding. 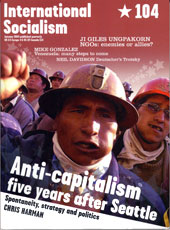