Stolen is a very comprehensive and readable account of the roots of financialisation in the 1970s crisis, which ended the “golden age” (1945-70) of capitalism, and the monetarist regime of Margaret Thatcher and Ronald Reagan, which ushered in what Grace Blakeley calls the “Anglo-American model” of economic growth. Blakeley argues that the period of “finance-led growth” since the 1980s, in which “capitalists were able to earn profits without actually producing anything of value” and in which the City of London dominated the economy, “inevitably and predictably” ended in the 2007 financial crash. Surveying a wide range of post-war British political and economic history, her book takes aim at the inadequacies of the Labour Party’s response to the sheer scale of the crisis. In its place, Blakeley demands a more radical response, “Finance for the People”, to go beyond capitalism.

The starting point for her analysis is the collapse of Northern Rock in 2007. Although tiny compared with Royal Bank of Scotland or HBOS, Northern Rock was a fairly typical example of the malaise of the financialised British economy. It operated a system of what Blakeley calls “warehousing”. Before deregulation by Thatcher and Reagan, the old model of banking and mortgage lending was based on taking in savings and lending a big proportion of them out in loans. This relied on banks and building societies being able to attract enough depositors to support their lending. But, under the guidance of its chairman Matt Ridley, Northern Rock bundled its mortgages (often 125 percent of the value of the house or flat) into collateralised debt obligations (CDOs), which were then sold on to financiers in order to raise funds for more lending. CDOs were held “offshore”, out of reach of the taxation system and not subject to regulation by the Bank of England—in the so-called “shadow banking” structure. In a ferociously competitive market, creating loans, bundling them and then selling them on, enabled a small regional building society to become the largest mortgage lender in the UK in the first half of 2007 with 19 percent of the market. Northern Rock’s half year report for that year projected a mammoth 24 percent return on its shares and a 30 percent dividend.

Like many others, Northern Rock also relied on short-term borrowing from other banks. When that funding dried up as a result of a loss of confidence in so-called “sub-prime” mortgages in the United States and a fear that CDOs were worth much less than their value (despite being approved by the credit agencies), the whole financial system in the US and Western Europe teetered on the brink of collapse. Labour prime minister Gordon Brown led the effort to rescue them, though it was the US Federal Reserve that took the decisive action—bailing out US banks and flooding the world, including the European Union, with dollars. As in the US, the obvious way to deal with Northern Rock and other bankrupt financial institutions was to nationalise them. But following the abolition of Clause 4 of its constitution, Labour was unwilling to do that—even while pumping state funds into the banking system in order to stave off bankruptcy.

Blakeley describes a pact between New Labour and the financial sector in which a “light touch” regulation regime enabled a ballooning of credit creation by the City, which in turn provided tax receipts that could be used to curb the worst excesses of the yawning inequality that resulted. The Tories’ earlier privatisation of public housing and state assets such as British Gas, combined with low interest rates and money creation through quantitative easing, drove a “financialised” Anglo-American mode of economic growth in which businesses profited more from financial speculation than from investment. The UK finance sector accounted for 1.5 percent of profits in the 1948-89 period—but by 2017, that figured had gone up to 15 percent. Low investment, stagnant productivity and low wages meant workers were increasingly reliant on debt in order to survive.

So economic demand was only being buoyed up by the supply of credit—a state of affairs that Blakeley refers to as “privatised Keynesianism”. She contrasts this situation with the so-called “golden age” of capitalism, when Keynesian-inspired state borrowing for investment kept the economy from falling into the down-swing of the economic cycle. She draws parallels between the way the post-war boom ended in the apparently inexplicable combination of high inflation and high unemployment from the 1970s onwards, and the concomitant battles between the Keynesian and monetarist variants of orthodox economics seeking to explain this phenomenon. She rightly points out that the technical argument over whether constricting the money supply was the correct method for controlling inflation actually concealed the real aims of the Thatcher project, which was to weaken workers’ organisation, which the government deemed to be the main cause of inflation.

The end of Keynesian “full employment” policies, the reduction of welfare benefits and attacks on the right to strike meant a fall in the proportion of national income going to wages. Privatisation, selling off council housing and other forms of “marketisation” resulted in a rising share of income going to rentiers. The boom in house prices meant “middle class” property owners could use “equity release” as a kind of credit card to increase their spending, thus creating a layer of the population which was loyal to the Tories. Meanwhile, those who rented and were forced to borrow to stay afloat due to stagnant wages and rising bills were increasingly drawn into the wrong side of the same debt-credit financial spiral, the “debt overhang”. Low investment, stagnant productivity and falling real wages contrasted with a now dominant financial sector. Low interest rates and booming asset prices have strengthened the parasitic rentiers that Keynes wanted “euthanised”. What Blakeley describes as “monopoly rents” are now extracted in the form of interest payments and fees, but also patents, copyright and other forms of intellectual property.

The tale of Northern Rock not only illuminates the story of the financialisation of the British economy, but also points to its roots in the subjugation of the trade union movement. Northern Rock’s former chair Matt Ridley is the nephew of Nicholas Ridley, the man who devised Thatcher’s plan to defeat the miners in 1984-85. Recognising the importance of the defeat of organised labour in ending the post-war settlement, Blakeley’s book is an attempt to envision an equally historically significant defeat for the financialised capitalism that followed. But what might be the obstacles to reorienting the economy away from “financialised capitalism”? And what are the political forces required to do so?

On the origins of the “secular stagnation” that bedevils so-called “mature capitalist economies”, Blakeley cites “political economic” factors—in particular, the problem of “insufficient domestic demand” caused by the state’s retreat from Keynesian demand management. The solution is to “shift the balance of power away from capital and towards labour by expanding state, community and worker ownership.” Referring to the Labour Party’s 2017 manifesto as “a return to social democracy”, she argues that achieving the defeat of financialised capitalism will rely on an electoral struggle buttressed by “social movements” such as Occupy, Extinction Rebellion and the Deliveroo strikes.

Blakeley devotes much of her book to the ways in which the removal of capital controls following the ending of the Bretton Woods Agreement in 1973 led to capital flight from countries trying to implement reforms, such as France under François Mitterrand. Noting the power of the so-called “bond vigilantes” to thwart radical governments using their power as holders of government bonds—and the ways in which financialisation has allowed Britain and America to play “an extractive, neo-colonial role in the international system”—Blakeley recognises that “definancialising the global economy” will face massive opposition from existing institutions. Subverting global capitalism will require a series of measures including debt cancellation, technology transfer and “mutually beneficial trade links” between the Global North and the Global South.

Blakeley is correct in saying that the managerial or technocratic tweaks beloved of the liberal elites offer no long-term solution to the crisis of capitalism. Ballooning debt and incipient crises in China and the US threaten the global order. Meanwhile, the economic crisis has thrown up both far right “populism” and, particularly in the US and Britain, a stronger left than has been seen for some decades. According to Blakeley, this socialist movement, once having taken hold of the commanding heights of the economy, will need to push towards “extending asset ownership to all working people in a bid to end the distinction between capital and labour.” Politically this means being “in and against the state”—using outside pressure to push the state towards a publicly owned, democratically controlled political formation.

Blakeley appears to accept both Thomas Picketty’s thesis that inherited wealth will always grow faster than incomes, leading to a widening of wealth inequalities, and David Harvey’s account of “accumulation by dispossession”—the idea that a primary method of capital accumulation is the (state-supported) grabbing of natural resources or dispossession through foreclosure due to unpaid debts, as with the sub-prime mortgages market in the US. Her solution is a democratised state redistributing wealth and stopping the rapacious activities of “financialised” capitalism, which she sees as one of the main causes of social inequality.

Blakeley is right to focus on “financialisation” insofar as it represents a significant shift in the way capitalism operates, as least in the US and Western Europe. However, despite the clarity with which she lays bare the political economy of financialisation, it should be remembered that finance still only represents an estimated 15 percent of the total profits in the British economy. Zeroing in almost exclusively on the activities of the financiers and rentiers can mean ignoring the rest of the capitalist system. Marx’s fundamental insight—that the ultimate source of value is human labour—points to a solution that goes beyond simply trying to eliminate wealth inequalities. 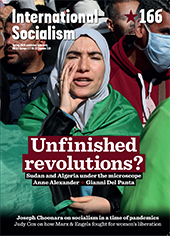