A review of Ygael Gluckstein, Stalin’s Satellites in Europe

This review of a book by Tony Cliff (using his real name, Ygael Gluckstein) originally appeared in 1953 in the French journal Preuves. For more on the background to this review see: http://isj.org.uk/when-rosmer-reviewed-cliff/

The Prague trial took place amid ‘confessions’ and ended up with the gallows, following a scenario which is now familiar and so well arranged that there is no possibility of surprises. But since this time it was set in Prague, there were, if no revelations, at least some lessons to be drawn from this new ‘Moscow Trial’. By having it staged in Prague, Stalin wanted to make clear that none of the ‘people’s democracies’ could aspire to escape from total Stalinisation. But the imposition of authority to which the ‘people’s democracies’ are being subjected is even more pitiless than that envisaged by Hitler, for the fundamental reason that this time the metropolis is more backward than some of its new colonies, which it has to exploit to meet its own needs, and where it cannot allow any exceptions to be made.

On all these questions, a book recently published in London provides a great deal of information. The author is Ygael Gluckstein, and the work is entitled Stalin’s Satellites in Europe. The publishers, Allen and Unwin, describe it as a critical study of the economic and political changes which have taken place in Eastern Europe since the Second World War, the description and analysis of various forms of capitalist exploitation – the capitalist here being the omnipotent state – , the bureaucratic and dictatorial management of factories, the increasing attacks on the social legislation which protected workers before the war, the subordination of consumers’ needs to those of the accelerated accumulation of capital, the imposition of collectivisation, the differentiations between members of Stalinist society ranging from outcasts to the new highly privileged groups of the regime, and finally social and national oppression. The documentation on which the author bases himself in his expositions and commentaries is irrefutable, since it is almost entirely drawn from official Russian publications and from those of the Communist Parties in the satellites.

The study of conditions existing in the countries occupied by the Russian army is not merely interesting in itself as far as each separate country is concerned; it is perhaps even more interesting for the light it sheds on Russian reality. It is highly relevant for the author to quote one of Napoleon’s aphorisms: ‘An army abroad is the state travelling.’ And the Russian state has travelled a lot since the war.

Rather than proceeding to what would necessarily be a very abbreviated summary of the various chapters of the book, I prefer to take one of them which can be examined in greater detail, and precisely one which stands at the very heart of the whole and influences every part: the agrarian question. This enables us to classify the satellites according to their economic structure. Bulgaria and Romania are almost exclusively agricultural, with 80% and 78% respectively of their populations employed in cultivating the land. Poland and Hungary are substantially less so, with 55% and 53%; and the special position of Czechoslovakia is clearly visible, since here the industrial population is larger than that engaged in agriculture, which is only 38%.

A further interesting observation on which the author is quite right to insist: it has been widely believed that a feudal system with the characteristic feature of large latifundia existed to the East of the Elbe until the arrival of the Russian army. This belief was partly due to ignorance, but it has been mainly perpetuated by propaganda. In fact, major agrarian reforms had been proposed and carried out in these countries between the two world wars, and sometimes even before 1914. Bulgaria had become a nation of small landowners; in Romania the law limited the size of estates to fifty hectares; in Czechoslovakia, the land redistribution as it was being implemented until July 1947 shows that it was primarily a question of finishing off an internal colonisation by expropriating ‘foreign’ landowners, German and Hungarian landlords. To state briefly what these various reforms led to, we can say that in Bulgaria and Yugoslavia, the changes have been insignificant; that in Hungary, on the contrary, there was a real transformation brought about by the destruction of the big estates; in Romania an earlier reform was completed and extended; in Poland and Czechoslovakia there was an internal colonisation effected by the expulsion of foreign landowners.

There is a certain element of optical illusion in the recent spectacular redistributions, but the exploitation of the resources of the satellites by the metropolis is wholly real and total. It takes on different forms: looting pure and simple, dismantling of factories, reparations, in the case of nations which were hostile during the war; for the others use has been made of the formation of Mixed Companies where the Russians dictate their conditions and arbitrarily fix the price of products traded when they conclude commercial agreements. In the course of debates in the United Nations Economic and Social Council, the Yugoslav delegate gave detailed information on the Mixed Companies created in order to contribute ‘to the reconstruction and development of Yugoslavia’s productive capacities’.

The Stalinisation of the satellites dictates how labour is organised in the factories; piecework, which, in Marx’s words is ‘the most suitable to capitalist methods of production’, is, as in Russia, encouraged everywhere. According to the paper of the Romanian Communist Party, it is a ‘revolutionary system that eliminates inertia and makes the labourer hustle. Under the capitalist system loafing and laziness are fostered.’ However, other texts reveal resistance on the part of the workers, and the hatred they direct towards the Stakhanovites. The same imitation can be seen in the creation of forced labour camps; minor thefts (of bread or an apple) lead to those guilty being sent there for ten or fifteen years, the numbers being determined by the needs of the moment.

From all these patiently assembled facts, Gluckstein concludes that ‘Stalin’s empire has no future’. When the enslaved peoples of Africa and Asia are awakening and fighting for their liberation, it is impossible to imagine that the peoples of Europe will accept for long being subordinated to an imperialist power. By breaking with Moscow, Tito has shown in practice the limits of Stalinist terror; he has destroyed the essential element required for its success, namely the belief by its victims in its omnipotence.

In 1936, Freda Utley wrote a book on Japan entitled Japan’s Feet of Clay. As this was the time when Japan was laying down the law to China and was colonising Manchuria, it was widely mocked, and even more so in the first years of the war when the Japanese armies and navy seemed to be threatening both India and Australia: these ‘feet of clay’ were certainly proving to be very nimble. But the end of the story was to show that Freda Utley had been right. 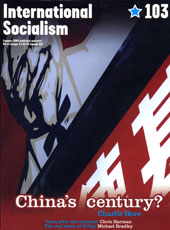